One of the greatest misconceptions people make when it comes to English Food that it's heavy and meat based.  Not to say that that aspect doesn’t exist; England obviously has its fair share of fatty, greasy, filling, and carb/protein laden foods.  And unfortunately, it just so happens that many of these foods i.e. roasts with gravy, potatoes, sausages, fried fish, etc. ended up being the stereotypical British dishes.  But having lived in London for…wow has it really been two months now!...I have discovered a less known, yet still very prevalent, daintier side to the English table.   It takes the form of a few little food items, some of which I have only ever seen in the U.K. and others that just have their own English twist.  They are the loveliest of things and so light and refreshing that, as we approach the rich food days of winter, these treats will serve as a welcoming break from that.
Elderflower Bubbly

I used to think that there was nothing more satisfying than taking a long draught of Coke when I was really parched.  Something about the cold fizziness and the sweet syrup just hit the spot.  But after being exposed to the English’s elderflower bubbly, Coke will not have the thirst-quenching power that it used to.  Elderflower bubbly is originally a Victorian era drink and is nothing more than carbonated water, sweetener (usually agave or raw cane sugar) and elderflower cordial.  The actual elderflower cordial is made by steeping the flowers of the elderberry plant in sugary syrup water with lemon and lime to create an herbal infusion. Then it’s just a quick mix with some sparkling water to create this amazing drink.  Many even add a little gin if they are in the cocktail mood.  The overall flavor is unlike anything I can easily compare it too but is like a combination of mint, lemon, honey, and herb flavors.  It has a slightly fermented alcoholic taste too, reminiscent of wine, but is much more sweet and light.  I treat myself to an elderflower soda quite frequently and it leaves me feeling restarted, energized, and refreshed.  My favorite brand is Luscombe, makers of organic, natural sparkling drinks.  And it’s not just their elderflower bubbly that's good but their strawberry lemonade, blueberry crush, and ginger beer, another great English drink, that unlike ginger ale, leaves you refreshed but with a spicy yet pleasing little tingle in the back of the throat.

I know, I know.  You can get honey anywhere as long as you’ve got flowers and bees.  But, in the U.K. it is very popular as a flavoring for sweets and accompaniment for dishes and drinks.  And the best kind of honey is not that pale processed stuff you get at the store, but what created close by.  Since my father kept bees in the country, I know there is really nothing quite like the taste of fresh honey right off the honeycomb, created from the flowers in your yard.  The flavor is so much deeper and earthier and the texture twice as sticky, creating golden strands as the spoon lifts a dollop out of the pot.  But, in a huge populated city like London, it is a bit more difficult to keep bees, therefore harder to get that  freshness and locality.  So that’s why Londoners are really proud of companies like Regents Park Honey or Urban Bees.  They inspire people to learn beekeeping and how to be a responsible beekeeper in a city so they can establish hives in their gardens or rooftops.  That way the friendly honeybees can gather nectar from the flowers of  London’s parks and everyone in London can enjoy fresh honey.  And it helps to protect their dying breed.  I like a dollop of their honey every day in my tea, on my toast, or a simple fingerful of it, as it is.
Crumpets 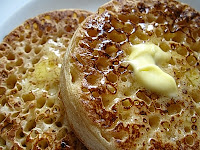 Now these things are really fun.  The first time I saw crumpets I literally couldn’t stop from squishing them around in the package.  They represent mushy, beige, cylindrical sponges, flat on one side and covered with hundreds of tiny holes on the other.  And I’ve been told that eating an untoasted crumpet is quite similar to a good chew on rubber.  So although I had to wait about 4 toaster rounds of toasting for this tasty breakfast, it was really worth it.  Once it got all crispy, the next necessary step was to slather on a huge slab of English butter, letting it soak into every nook and cranny of the crumpet, and then give it a smear of my favorite jam.  The first bite into this crumpet gave way to an initial crunch followed by this really dense and squishy interior that was warm and soft and bubbly feeling in the mouth. It leaked out some of the butter that it absorbed earlier and the chewiness and stringiness was strangely pleasing.  I’ve heard it’s a nice toast replacement for Winter so I will certainly be stocking up on these in the weeks to come. 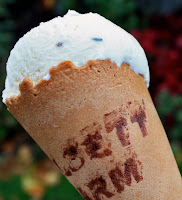 Like the honey, I know ice cream is very universal.  But in London, it’s actually a bit different.  I don't find the monstrous ice cream aisles that I see at Giant or Safeway and the hundreds of corn syrup filled brands lining the shelves.  Many of the ice creams here are actually organic and made using all fresh and natural ingredients from nearby creameries.  One of my favoriete ice cream experiences was a refreshing cone filled with honey-lavender ice cream from Helsett Farms, a creamery in Cornwall, England’s dairy region.  Since they run such a small-scale business, the ice cream had a different texture and was slightly icy, yet just as satisfying.  But, my favorite ice cream in London is from this little shop called Scoop, which may just cause the obesity of my flatmates and I before this trip is up.  Scoop is a gelateria and uses only the best and freshest ingredients and makes all the gelato on site.  And for a mere 3 pounds, I get two huge scoops of any two of their tantalizing flavors.  It is incredibly creamy and dense and their extra dark chocolate gelato is really something sinful. So although ice cream is nowhere near just an English thing, the Englanders add their own flair with national flavors like rose, ginger, lavender, honey, and toffee.  And Scoop has really been a staple in my London food experience and has saved me during some stressful homework nights.

These 4 food items are the lovely little things that sometimes make my day and are those refreshing items that perk me up.  And I will really miss some of them, like the elderflower, the crumpets, the ginger beers, and the floral ice creams, once I am deprived of them in the States.  So although the English know how to make a meal that will really fill the belly, they also do a pretty good job at making things to counterbalance that.
Posted by Unknown at 5:17 PM